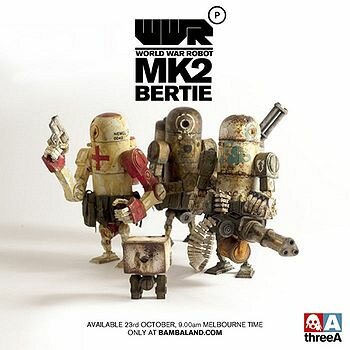 Bertie Mk 2 is the 2nd version of Bertie the Pipebomb and the first Bertie to be produced by threeA. It was released in the WWRp scale, and added feet and redesigned legs to the original bot shape. At this time, Ash has no plans to release a Bertie Mk 2 figure in WWR (1/6th scale) [1].

The WWRp Berties from WAVE TWO (7 pack and singles) all come with corresponding 1/12th scale Squares except for Desert Combat "Sandy Fuck," which comes with a Euro Defense Square, and the Deep Powder which comes with a Winter Defense square

Bertie Mk1 has become a common sight in the battlefield, the unit a major success for the Rothchild Corporation.Even so reports of mobility problems on soft surfaces have plagued it's reputation, loss of traction, toppling and partial loss of movement have been noted. Mk2 was not offered as a replacement for the Mk1 but as a new addition to the Rothchild war-robot catalogue. Smaller, lighter, quicker and able to traverse most terrains, he Mk2 is becoming the Bertie of choice as the war continues.

Bertie Mk2 is currently teamed with the new Bertie Mk3 in hunting packs linked by the new MCS (maternal combat software), that has the Mk3 protecting the Mk2 vigorously to say the least. Martian forces have also been deploying strike forces consisting of Bertie MK2 and Dropcloth with devastating results against the Earth Coalition since its introduction showing that the Mk2 is an adaptable unit.

Even though the form factor of the Mk2 has changed considerably, one of the most important changes is V.4 of the A.I, giving unprecedented freedom in Bertie Mk2's decision making. Though some unfortunate "incidents" have occurred, the battle-field has not looked back!

Rothchild Corporation does not rest on its laurels, the Mk2 just confirms this.