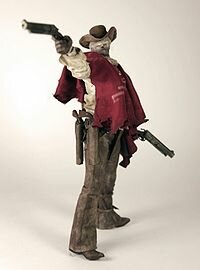 Blind Cowboy, also known as "Emit Brown" or "The Blind Gunslinger," is a mysterious character in the Popbot Universe who is hunting Kitty. Blind Cowboy is distinguished by the rag blindfold covering his eyes that was once used to wipe the blood from JFK during his assassination.

Although this character was one of the first Popbot figures announced for release by ThreeA Toys, he has spent extended time in research and development with an August 2011 release.

His family killed by a gang of deranged robots, his eyesight taken as payment for someone else's debt. He now wears the rag reputedly used to mop the bloody brow of the assassinated JFK, the turgid rag now giving a clarity of vision, a clarity of justice and revenge to the Blind Cowboy. His is only friend, a horse named Ghost!