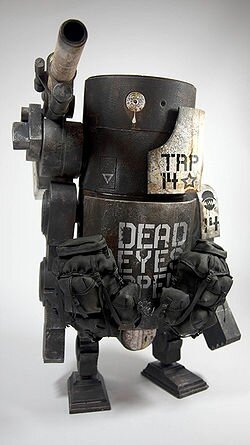 Large Martin is a bot in the WWR series. Whereas Damn Large Martin has two cannons, Large Martin only sports a single cannon over his right shoulder.

New WWRp scale Large Martins are scheduled for release as Retailer Exclusives in 2011.

Large Martin was developed by Rothchild as a more effective way of handling large Bramble Mk2 platoons which were proving to be quite unstoppable on the battlefield. A Large Martin herd (LMH, 8-12 Large Martins) can effectively lay waste to the opposition from a tactical distance and has become the standard for "softening" the opponents' position before sending in Dropcloth gunners to handle the survivors.

Large Martin does not have the land speed of Bramble Mk2 or Bertie Mk2, but coupled with the standard Square2 accompaniment running support and retrieving field data in advance makes Large Martin a formidable robot to face.

Large Martin was first deployed in the now legendary Martian siege of Moscow, which saw the largest Martian forces ever assembled on Earth held at bay for four days (in large part thanks to the BIG RED Large Martin division) whilst the Earth Coalition organized an effective rear-guard attack. Now a standard fixture on all battlefields, the only real question: What will Rothchild manufacture to counter Large Martin's dominance?

A list of colorways released for WWR Large Martin

A list of colorways released for WWRp Large Martin