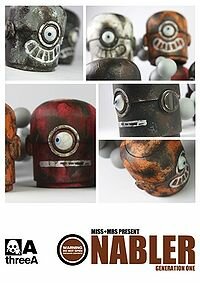 The Nabler is a mysterious robot head in the Popbot Universe that is widely featured in the M+M comic strip and original paintings by Ashley Wood. Although little is known about the origin or nature of the Nabler, his personality often possesses aloof, manipulative, salacious, and scheming characteristics. In one of the M+M strips, it is revealed that someone resides inside of the Nabler's head.

Some paintings feature Nabler attached to a human body and it was revealed that the human is killed by Nabler and the body taken over so Nabler can gain new experiences.

The Nabler was first given a name (in print form) in a one page comic featured in Fuck-It One.

The toy has seen limited release on Bambaland as well as a gifted release as a GID Nabler variant received only through various prizes by ThreeA, such as the "photo of the week" featured in the VOX Newsletter. 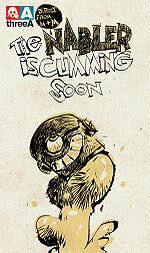