Nom de Plume is a character in the World War Robot toy line by ThreeA and the first character to be released. His allegiance is not certain, though it is believed that he was a member of N.O.M. at some point in time who may or may not have gone rogue. Nom de Plume also possesses unique abilities such as being able to communicate with robots and changing his skin colour to suit his purpose and environment. It is unknown whether these descriptions by Ashley Wood are literal or not. According to the story, nobody has ever seen Nom de Plume's face beneath his mask, which is why his mask and helmet are not removable on the figure.

The toys were previously explained by Ash has having different names to accommodate for Nom de Plume's changing appearance but that they were one individual character represented by different guises. As Jung de Plume was released, it was stated that this was a different character and the release of the Fallen de Plumes saw further identity confusion. In a more recent post [1] on 3A Forums, Ash clarified that only Nom de Plume and Noir de Plume are the same character.

Although this contradicts the descriptions that had been previously given, it is likely due to the fact that Ash is continually developing the story and world in which World War Robot takes place. This means that all the "de Plume" characters beginning with Blanc de Plume, and further, are indeed unique characters.

A list of toys in 1/6th scale that use the Nom de Plume mould: 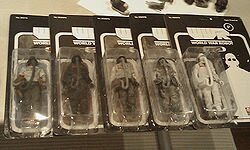 All known WWRp Noms in packages

A list of colorways released or announced for WWRp Nom de Plume: