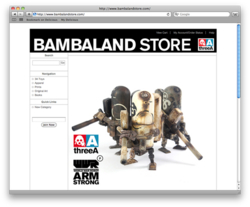 Screenshot of Bambaland prior to WWRp Armstrong release

Bambaland is the name of the original online store of ThreeA. As of 17 September 2012, ThreeA switched to its current official online store, Gallery ThreeA.

Several online and brick-and-mortar retailers also carry threeA products, and ThreeA often had releases that are Bambaland exclusives or retail exclusives. Bambaland was usually in stock once a month with that month's significant ThreeA release, which was often announced with an update to the ThreeA Countdown Widget, however ThreeA had also carried out ThreeA Resident Sales at Bambaland as well. Most monthly drop information was also announced on the ThreeA Production Blog and 3A Forums.

For Chinese speaking fans, an alternative to Bambaland was opened called Bambasia, which has also since been closed in favour of the new store.