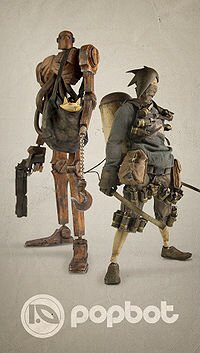 Popbot is the name of a designer toy line produced by threeA, which is based on an award-winning prestige format comic book of the same name written and illustrated by Ashley Wood and published by IDW Publishing.

Most figures from the Popbot Universe have been released in 1/6th scale, but the Action Portable toy line has begun to introduce 1/12th scale Popbot figures ranging from the Tomorrow Kings to Ascended Popbot.

The following figures have been released or announced in for Popbot. Due to the vast quantity of Tomorrow Kings and Tomorrow Queens produced, the variations for these that are not a part of specific groups are listed in the relevant articles.