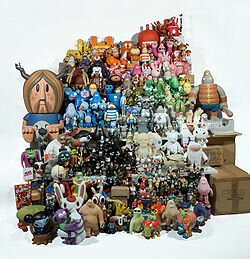 A collection of designer toys

Designer toys is a term used to describe toys and other collectibles that are produced in limited editions (as few as 10 or as many as 2000 pieces) and created by artists and designers. Designer toys are made of variety of materials; ABS plastic and vinyl are most common, although wood, metal, and resin are occasionally used. The term also encompasses plush, cloth and latex dolls. Creators of designer toys usually have backgrounds in graphic design, illustration or self-described low brow art; some are classically trained in art and design, while others are self-taught. Designer toys first appeared in the 1990s and are still in production today.