From threeA Wiki
(Redirected from Harold)
Jump to: navigation, search 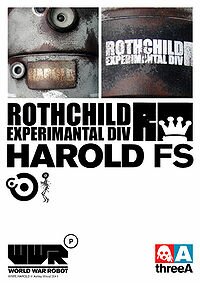 Harold, most commonly referred to endearingly by fans as Harold the Fucktard, is an Experimental Division robot and allegedly one of the early robot designs by Rothchild. The Harold AI is known to be extremely faulty, a trait that is represented in more than one story in the WWR Books. The term Harold the Fucktard comes specifically from a story from the first book where Harold is specifically the main focus. Harold is the only robot to feature the unique design of tank treads for mobility.

The Harold figure was initially revealed to be available only in WWRP 1/12th scale, but at standard Bambaland release both 1/6th and 1/12th scales were packaged together as a set. The figure includes two arms as well as two arm-weapons so that purchasers can choose which way to display their figure.