Noir de Plume is the guise that Nom de Plume used while he took control of the Dirty Deeds Squad.

Tagline from box: "The shadow of a madman"

The WWRP Scale Noir de Plume figure was Bambaland's first 1/12th scale 'stand-alone' single carded release by ThreeA on 20.08.2010, with an extremely limited release that sold-out within minutes. (other 1/12th figures preceded it, but all were sold in conjunction with other products or at events.) 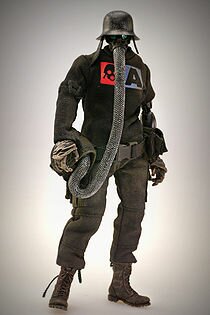