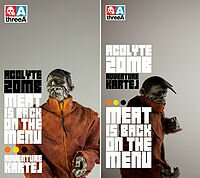 Zomb 2 is the second Zombie head sculpt for the Zombie figures in the Adventure Kartel toy line. The first Zomb 2 figure was released was Commander Zomb in the Ankou 2way pack, along side the N.L.C.S. Commander Ankou.

The second Zomb 2 figure release was on 1st January 2010, at 00:00am HKT, as the Acolyte Zomb available as individuals or in the 4 Zomb Monty Superset which included the exclusive Albino Zomb.