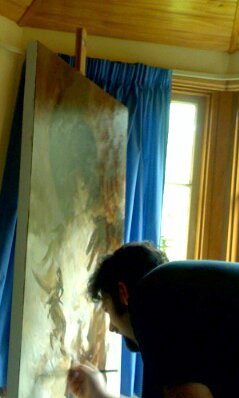 Ashley Wood at work in his studio. Working oil on canvas for Popbot #8.

Ashley Wood (born 1971) is an Australian comic book artist and illustrator who is well known for his cover art, concept design and his work as an art director.

Ash generally works in mixed media, often combining oil painting with digital artmaking or working in inks and markers. His style contains elements of expressionism and is constantly developing. In recent years, he has given a stronger focus to his oil painting works and less focus on digital works.

Ashley Wood is an award winning illustrator who worked for many years in both the U.K. and international comic book worlds (working on characters such as the British icon Judge Dredd), before breaking into the United States market where he worked for such companies as Marvel and DC. Ash later worked for Image creating graphic novels and cover art for the various Spawn properties of Todd McFarlane. More recently, he has been pursuing projects with IDW Publishing.

Ashley Wood has also many forms of entertainment media, having contributed to both movie and TV projects. He has also worked solidly in the field of advertising and is an exhibited fine artist.

Ashley Wood is the creator of the Popbot series of graphic novels and has illustrated a new series of the cult comic Tank Girl with writer Alan Martin and Rufus Dayglo. He also created the artwork for British rock band Reuben's third album, In Nothing We Trust.

In 2004, Ashley Wood and TP Louise formed 7174 PTY LTD., an Australian-based entertainment company. Operating from Australia on a global scale, 7174 is active in creating entertainment properties for the comic, film, toy, and video game industry among others.

Using an international network of development partners, coupled with the vast experience 7174 has, the company acts as an "umbrella" organization which allows Ash to create, own, and distribute his creations through a variety of media outlets.

Already, 7174 has produced the hit comics Popbot and Lore with IDW Publishing, and is currently active in Hollywood.

In 2008, Ashley Wood and ThreeZero founder Kim Fung Wong created threeA, a Hong Kong based production house for designing, developing and manufacturing toys, posters, prints and clothing based on characters created and designed by Ashley Wood.