Kim Fung Wong (also known as threezero) is co-owner of ThreeA and toy designer located in Kowloon, Hong Kong who has been designing 1/6th scale toys and vinyl toys for well over a decade. He began toy designing as an independent artist until he founded his own company and began collaborating with friends in the same field.

After the collaborative effort with Ashley Wood and Bigshot Toyworks that produced Bertie the Pipebomb, Kim and Ash joined efforts and together founded threeA. 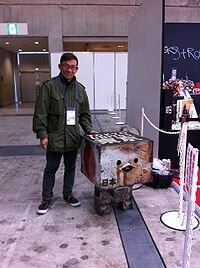