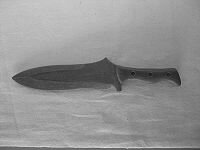 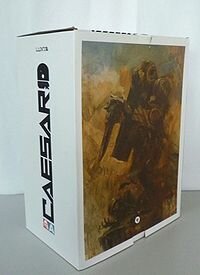 Caesar is a robot release in the WWR Universe. Not much is known of Caesar at this time other than that he is "the most agile, smart, and nastiest [bot] yet" and that some of these bots were designed to protect Rothchild from groups like the Dirty Deeds. [1]. They are one of the bot types used by Rothchild Internal Police, and are equipped for close-range fighting and personal security. Their primary equipment includes Big Pam Pistols, a shoulder mountain shield, and Knives, including a preferred knife type, the Harmonic Knife. Some Caesars utilize the additional CLAXTON80 Heavy Machine gun or Bertie SMRTGUN weapons.

The figure itself will stand 16.6 inches tall, which finds him standing between Armstrong and Large Martin, and will come with two head-types. Caesar will be the first of the LUX3A series releases by ThreeA.

Many lonely hours were spent on the Moon thinking about the machines of death that Rothchild had birthed into life, each theoretically more than capable of killing their father. This thought had weighed on him, made him feel proud and yet, less than superior. He wasn’t fond of this paradox, a fence sitter's answer to non linear problem.

Rothchild had never felt truly safe since the failed attempt on his life by the Dirty Deeds Squad, even on the moon that he now owned. His own children had been turned against him; the Dirty Deeds failure to kill Rothchild was not based on their lack of skill or quality of build, but a maverick lust for freedom. Rothchild made the discovery of this anomaly his main goal, find it and use it!

The R.I.P program was the fruition of this search, limitless resources were poured into it, the brightest minds were used, once Rothchild was satisfied that each had given their all, a letter was sent to their families announcing their unfortunate demise. This was Rothchild's baby, there was only one father, and it was going to stay that way!

The first fruit of the R.I.P program shuddered into life, 001 quickly moved into a defensive stance to take in its surroundings and assess any potential threats. Rothchild watched the action remotely, far away from any potential accidents. He watched and studied the movement of... Caesar… Yes, that was a good name... Rothchild would have been disappointed if Caesar had just struck out, animalistic and desperate, but the machine didn’t, it quickly processed long lists of speculative questions and possible solutions. Then Caesar’s stance relaxed, none of these "things" were a threat; it didn’t need to offer any type of response that would be too revealing and expected. Rothchild beamed, a hint of color in his gaunt, pale face. A proud father, he knew that he had finally made the robot he had dreamed of as a child to protect him.

It was a good day for Rothchild, the thought of his own internal police of terrible children, and of course a lesser version of Caesar for the war machine, a machine he dearly loved.

A list of colourways released for 1/6th scale Caesar: