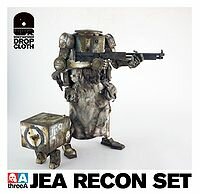 JEA Recon Set is a set that was announced on 2011-03-31 for the Marine JEA Colorway. It contains a WWR scale Dropcloth and Square².