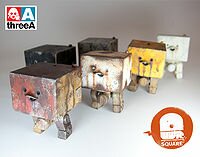 The Square² (or Square) is a small support robot in the WWR Universe. Variations of the Square² have also made an impact in the civilian sector including emergency logistics and light cartage. The original Square² is the Mk 1 version, as there are also Square² Mk 1.5a, Square² Mk 2, and Mighty Square versions.

In WWR format, Squares were released on Bambaland as a 10 pack or three different 3 packs. DIY Square was only available in the 10 pack, and was the first Do It Yourself figure by threeA. Retailers were given cases of sixteen Squares which contained Blind Box assortment.

In WWRp format, Squares (sometimes referred to as "mini-Squares"), were initially made available combined with WWRp Bertie or in the special Frosty Choad and Under The Bed Super Packs. A set of 1/12th scale Square²s is also in the works. 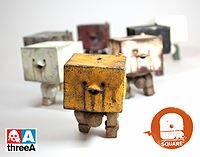 The Square, smallest of all robots designed by Rothchild and Co. Essentially an autonomous intelligence (allied troop position, enemy position, telemetry) gathering machine, the Square plays a pivotal part in all battlefields on both sides that Rothchild had to devise special empathy features on top of heavy armor to help lengthen their up-time in the field. Known as the "carnival effect", the Square attempts to disarm all those who come across it with sickly childish features combined with specially designed audio emissions of the phrases such as: "Why can't we just get along?" and "Come out and play", all with the tone of a small child.

Variations of the Square have also made an impact in the civilian sector including emergency logistics and light cartage.