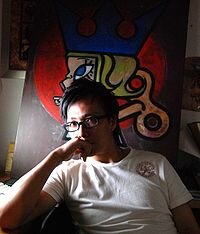 Kenny Wong is the founder of the personal illustration workshop, kennyswork, designer of the Brothersfree and is also a member of the Hong Kong Illustrator Society. Since finishing the art and design program, he subsequently embarked on the advertisement and design business, working for an ad firm as a drafter, designer and illustrator.

Kenny loves to paint and make sculptures, and his works were used on display at the Hong Kong Arts Center, the Hong Kong Cultural Center and the University of Hong Kong Museum. Wong is best known for his Copperhead-18 figures, as well as his Molly character and figures.

Kenny Wong was a featured guest at both Hong Kong Venture (2009) and Běi jīng jù huì (2010). Kennys's first collaboration work with threeA will be SeaMonkey under the Showcase toy line.