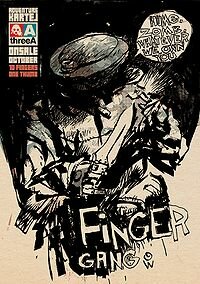 3AVOX5 Advert for the Finger Gang

The Nefarious 10 Finger Robot Gang is a group of Zombot 2 neutral characters in the Adventure Kartel universe that are neither heroes nor villains. Lead by King Thumb, the Finger Gang consists of ten Zombot 2 figures, who seek to aid him in his pursuit of Cherry Shadow's affection.

TheFinger Gang blow into town, their boss King Thumb wants some attention from Cherry Shadow, the alter ego of Little Shadow. Apart from Little Shadow being kinda pissed that some lowlife bot wants some, king EMO himself, Tommy Mission ( part time boyfriend and nutbag to Shadow )doesn't take it too well either. rev up the TEARS !

The 10 Finger Gang was initially offered as a blind box singles assortment available exclusively through Bambaland in October 2011. A Faux Retailer Box Set including all eleven members was also made availabe through Bambaland in October and is described by threeA as their largest box set to date. the Nefarious 10 Finger Gang singles and Box Set are estimated to release in February 2012.