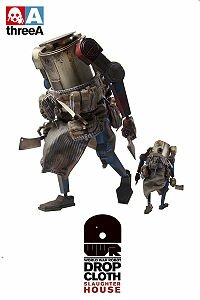 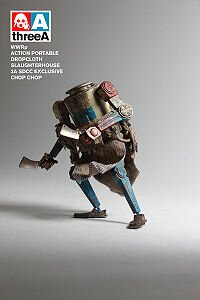 Slaughterhouse Dropcloth is a colorway of the Dropcloth robot toy. The WWR scale toy was a retailer exclusive colorway, and the WWRp version a 2011 SDCC Exclusive. Slaughterhouse has been described by Ashley Wood as an assassin "Martian experiment in terror" that comes only in the Dropcloth bot type.

As told by Ash on 3A Forums:

"they rest during daylight, as their light sensors pick up the fleeting light, they crawl from their hiding spots, tapping on windows , killing pets, and wholesale slaughter of towns etc etc. The Euro Bramble Project has been very effective against these bastards in Europe, and now many other countries are deploying units to just to hunt and destroy these dropcloth as they rest.. kinda like vampires etc"

"Slaughterhouse is the worst, no restraints."