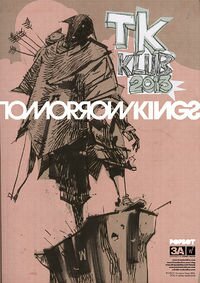 TKLUB (a stylizing of "TK Club") is a series of Tomorrow Kings related figures that has been inspired by the great interest fans have shown in their variety and aesthetic. Although TKLUB was initially conceptualized as a club membership, it has evolved into a more symbolic title for something less constricting.

TKLUB figures are sold individually, and available to 3A Associates with the standard 24 hour ordering window. Sales do not feature additional variants or surprise releases. Although the name references the Tomorrow Kings, Tomorrow Queens will also be released in this line. Free bonus items offered to the TKLUB clientele have specific, unique prerequisites (such as Mook being available to those who purchased the first three TKLUB figures) and shipping for bonus items is covered by the recipient. These prerequisites are announced in advance so that customers can take them into consideration when planning their purchases.

A list of figures and items released under the TKLUB label:

A list of figures announced for the TKLUB label:

After thinking about TKLUB and talking to you guys about it, I have thought maybe instead of limiting the ability to be part of the TKLUB to only those who can get every figure, I have come up with what is probably a more open and wallet friendly system. Basically you will be able to purchase any TK, but to participate in TKLUB offers you will have needed to purchase certain figures etc. Say to get a ART OF TK BOOK, 1:1 TK shirt ( man i still want that 1:1 box set of the original TK shirts. Write to CS and demand them! ), new exclusive TK heads etc for free (you still have to cover shipping) you will have needed to buy the first three TKLUB TK’s and so on.

TKLUB will start soon as I get the sample of Oroshi, Im hoping to be able to use the old-school box with sticker for each TK release, I miss those boxes !

So there ya go, thats it, just wanted to share with ya. One thought, I really think we need a mortis figure now, with all these TK running around they need some Mortis to play with!

have a good weekend