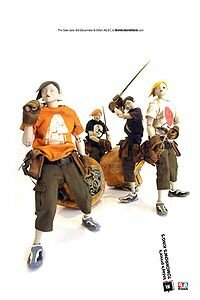 Ad for the Tomorrow Kings

Tomorrow Kings are male clones, from the Popbot Universe who were created by Luthor Bean Jr. originally used for corporate takeovers. These "Elvis ronin" were created to slay all monsters & ghouls with Luthor Bean Sr.'s Ion Engine that escaped Earth. They are also used to fight the Mortis.

Made for war against robots. Genetically bred autistic warriors who cannot dress themselves, but can shear off a robot's head with nary a thought. Alone, even though their brothers number in the millions, yes we are doing fine, like the last time, like the last time. They face death from steel, but do not know how to say hello. Today's Princes, Tomorrow's Kings.

A list of Tomorrow King figures released or announced in 1/6th scale:

A list of Tomorrow King figures released or announced in the Action Portable line: