Tomorrow Kings Oyabuns are a more agile and skilled type of Tomorrow Kings. In the Popbot books, they have only been mentioned once, but the figures have seen great demand. They are most distinct because they sport a large puffed coat and two katanas. The Oyabun figures were released separately or together in a limited edition two-pack.

The word "Oyabun" is Japanese for "Father", but more appropriately references a don (an Italian mafia boss).

The Oyabuns also came with a bonus Lasstranaut t-shirt. When the figures were ready to ship, the t-shirts failed to meet Ash's standards and were sent back for re-printing. Due to this delay, the t-shirts were sent out at a later date at no additional cost. 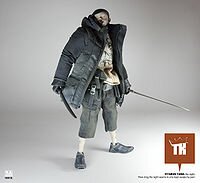 A list of Oyabuns released or announced as figures:

They fight in 4D {x}=(p,q,r,s)
Extract from Bernard Sumners's book "The Up Brain"

The whine and scream of Mortis Devil bots in the distance rouse Yama and Naga from their sleep, with machine like precision they prepare for battle, not a word or look is exchanged between them. With a slight acknowledgment of my presence they leave our temporary dwelling for battle. I never saw them again, my time with them remarkably serene and enlightening considering my guests disposition of being bred for war, their minds able calculate such complex equations in pre-time giving them access to spacial reality's outside the norm. With autism once considered a debilitating state of mind, it could now look to be a high evolutionary path ?

From my observations both Yama and Naga always set out to find the most elegant and simple path to all actions, whether crossing a room or bringing down a one hundred foot tall warbot with a single stroke of a blade, nothing is wasted from breath to thought. What I find most interesting is their behavioral differences. TK's have always seemed to share a similar dispossession and lack of defining individual character, whereas Yama and Naga are quite different, Naga is more , for a lack of a better word congenial, where Yama seems aggressive and brooding.

I ask, are they are the next step in the evolution of TK, a warrior bred for fighting and nothing more, or just an anomaly ?

What happens when they want more ?, can we be seen as anything other than inferior to them ?

Mortis air bursts get louder, we are moving out, Yama and Naga move in.