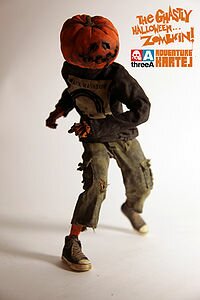 The Ghastly Halloween Zombkin is a mysterious character in the Adventure Kartel Universe who rises every Halloween to claim thirty-one victims. According to Ashley Wood his head falls off after an hour and, once the ground consumes his body, it takes a year for his head to re-grow and revive the Zombkin so that he may repeat his cycle of murder [1]. Ash also informed us that Zombkin doesn't eat people but, rather, murders people for their flesh; which he needs to feed his pumpkin patch so that the nutrients can restore him the following year [2]. Although "zomb" is in his name, Zombkin has "no love for Zomb or anyone !" [3]

This figure was sold in a Ghastly Halloween Zombkin 2-pack set with a 1/12th scale version. Ash has commented that the 1/12th scale figure might actually be a 1/6th scale "extension" of the Zombkin who helps him sneak into houses [4].

Every Halloween, the GHASTLY ZOMBKIN rises for one hour to claim its 31 victims ( that's more than one victim every two minutes for the math impaired ). The smell of sod, the grinding of teeth, yes its the ZOMBKIN ! If you dare you can get your own ZOMBKIN on the 31st of OCTOBER in the first 1/6th - /12th set from 3A !

Text From the Box

Once a member of the BLACK RAINBOW band, now dead, well kinda... Once a year, (strangely on Halloween), Zombkin rises from his pumpkin patch to harvest folks and use their fetid bodies for fertilizer!