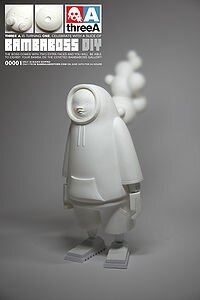 Standing nearly 12" tall Bambaboss is, for all intensive purposes, the mascot for Bambaland. Originally released as a DIY (Do It Yourself) figure to celebrate ThreeA's 1st year. Many variations have been produced, all in limited quantities.

Bambaboss originated in paintings and sketches by Ashley Wood, which have appeared in many of his publications and series (Popbot, World War Robot, and many of his art books).

Though not grounded to any particular universe or series, below is WWR bambaboss info/story from the official 3A newsletter(sent out June 23rd 2009 when the 1/6 DIY Bambaboss was available). It should be noted, however, that Ash has since reported that Bambaboss does not belong to the WWR Universe.

I don't believe in evil, none of that loopy shit. Hell that's why I became a martian. Keep it real, know what I mean? But damn, I'll never forget seeing our platoon's Bamba Boss watching over the bloody carnage of the Darwin siege, that filthy toothy grin, the guttural electronic laughter. Damn I believed in evil that day, an evil robot! From what I know, the same Rothchild research group that brought us that lil' bastard the Square, cooked up the Boss."

A list of all released or announced variations of the Bambaboss figure in 1/6th scale: 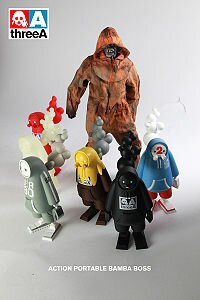 A list of all released or announced variations of the Bambaboss figure in 1/12th scale: