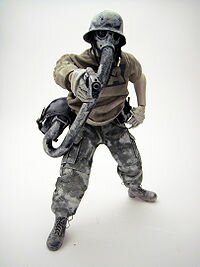 Blanc de Plume was the third official de Plume release and was never available for purchase. There were a number of ways to acquire this figure including finding a randomly inserted sketch in your Bambaland purchases, participating in the Monthly Photo Contest (2009) or Monthly Sketch Contest (2009), doing good deeds for the threeA community or for Ash himself, or really any reason that Ash decided was worthy of receiving the oh so coveted Blanc de Plume.

In the WWRp scale, Blanc de Plume was included as a free figure in the Large Martin 3x3 pack.