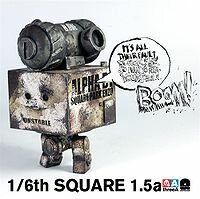 Square Bomb is a secret release World War Robot figure that was available during the Caesar pre-order at Bambaland. Although he resembles a Square² Mk 1 with a bomb strapped to his "back," Square Bomb is a Square² Mk 1.5a model Square² with notable differences in the nonchalant expression; particularly, the left eye has an "eyebrow," and the mouth is closed and straight.

BOOM! the Square 1.5a ( also known as the Square Bomb) was only tested for 3 days at Square Park ENZO, on the third day all the Square 1.5a got together and went KABOOM, they were after all little shits with bombs on their backs. ENZO park was no more and with the lead B-SQUARE Engineers killed in the explosions and all prototypes destroyed the test program ended.... OR WAS IT !