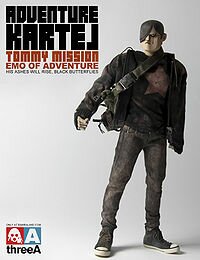 Ash has suggested that Tommy learned how to fight from his "on and off again" girlfriend Little Shadow and that he doesn't have a soul. Two of Tommy's notable companions are Fighting JC and Shadow Zombot.

Tommy Mission, self styled Emo of Adventure, founding member of the Adventure Kartel and son of the much revered Bleak Mission!

With no choice but to adventure ( as it was his family's tradition to prove that every episode of In Search Of was infact factually correct and everything in those episodes was indeed real! ). Tommy with his trusty Hand of Fate and on and off BGF Little Shadow, scour the world in search of mystery and adventure.

When not hanging at cool underground, indy, alternative, vinyl only, record stores, he can be seen at Bambaland, where for 80 bucks he will come home with you for some adventure!

Oh yea, due to AK adventurer rules, Tommy has to wear a regulation tracksuit while hanging with Adventure Kartel, it's dark and dirty, so its still pretty EMO...Right?