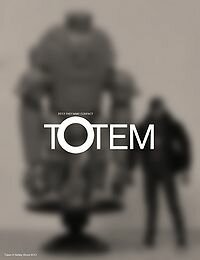 Totem is a new intellectual property by Ashley Wood and T.P. Louise that is also being developed as a new toy line produced by ThreeA. All that is known about Totem is that it deals with ideas regarding space and aliens and is described by Ash as "spooky sci fi" [1] that "never leaves our solar system" [2].

Although the first teaser image released (right) features Tommy Mission, Totem is not related to Adventure Kartel; as Ash had stated that the Tommy figure is there purely for size reference alone.