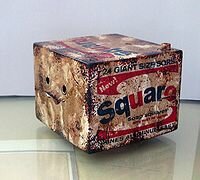 Squaro Square², more commonly referred to as Brillo Square for its Andy Warhol pop-art reference, is an extremely limited ThreeA Square² figure that was sold at San Diego Comic-Con (2011) as a retailer exclusive for Toy Tokyo.

Although the Square² figures are a part of the World War Robot universe, it is unclear how exactly Squaro fits in the story. This exclusive figure also comes with a unique limited edition print.

This figure was originally priced by Toy Tokyo at $75 until Ashley Wood demanded they lower to a more reasonable retail price (which ended up being $50). With a small allotment for sale each day of the convention, there are rumours that Toy Tokyo sold most of the Squaros to exhibitors who queued before the doors were open to convention attendees. There is no evidence either in favour nor in opposition of this allegation.