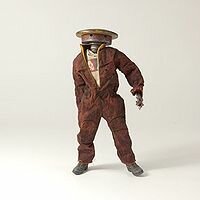 Zombot is one of the Zombots from the Adventure Kartel Universe that shares a similar head as Bramble. Originally released as an edition of approximately ten, a pair of Zombots were auctioned off, with the proceeds going to Make a Wish HK.

Five of the produced Zombots were part of a "lottery chase" where customers who purchased a regular Boiler Zomb were entered into a lottery for a chance to purchase Zombot at retailer price. Ashley Wood said: "if you get a zombot via lottery it a choice to purchase on top of standard, or swap etc ... if you get via blind box, you can indeed get the zombie that was originally wanted or you email 3A and say no way to chase or rares in advance." The remaining Zombots were randomly inserted into boxes of standard Boiler Zombs.

Zombot is owned by Zomb MD, but Ash has said that the Shadow Family created the Zombots, which brings to question as to why he would own one. An older quote from Ash states that the original Zombot was an experiment by Zomb MD gone wrong. Each individual Zombot is a unique Adventure Kartel character. There are no plans at this time for further Zombot characters. 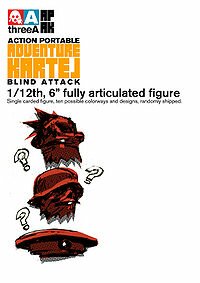 Zombot 2 is a different type of Zombot that has an updated appearance that is closer to Ashley Wood's vision for the first Zombots. The original three Zombot designs are respected, and preserved, and will not be re-released in the Zombot 2 design.