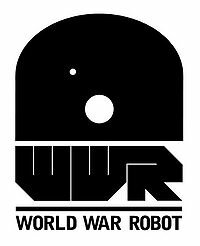 World War Robot is a graphic novel illustrated by artist Ashley Wood and written by both Ashley Wood and TP Louise. The picture book combines an unconventional use of pairing painted images and essays to tell small parts of a larger story. The prose include excerpts from various diaries, journals and transcripts based around the humans involved in a fictional war in the 1980-1990s known as the Great War.

The Great War takes place between multiple different factions; the most obvious are the Martians, humans who have left Earth and settled on Mars seeking refuge, and the Terrans those who remain on Earth and seek to subdue the Martians to their fanatic religious ideals with violent means. Both sides utilize warbots in their ongoing conflict. Most of these are manufactured by Darwin Rothchild, but there has also been mention of Hobson and Dolch, a competitor of Rothchild (Corporation). Further factions within the war include N.O.M. and M.O.D.. Due to the storytelling format that Ashley Wood and TP Louise have closen, many plot details are left open to the imagination of fans as the story and universe is explored in greater depth with each book release.

WWR format figures are 1/6th scale toys of the various bots and humans of the WWR Universe, while their smaller WWRp counterparts are half that size at 1/12th scale.

The following is a list of characters and robots released or announced in the WWR format (for more information on variations, see the main article for that specific figure).